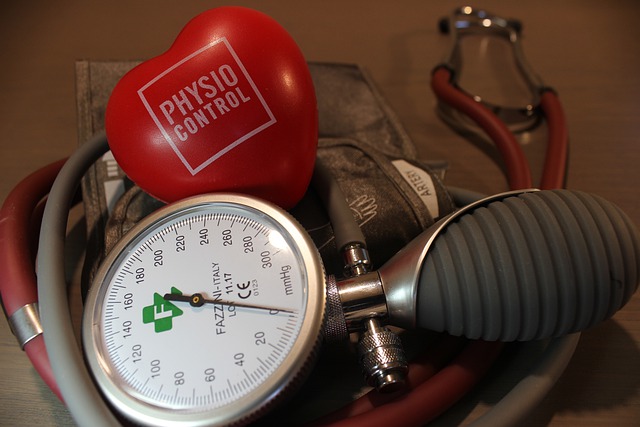 In a recent conversation with my father, he was sharing that his doctor advised him to cut out all salt due to slightly elevated blood pressure and take blood pressure medication.  He and I had a chat about the benefits of salt in our diet and why it has been so demonized and I wanted to dive into that deeper with you to shine some light on good ole’ salt! 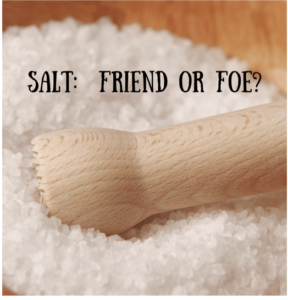 Health magazines damn it, foods labels trumpet their lack of it, and doctors caution using it.  But what’s the cost of avoiding salt? I’m talking about sodium – or rather, table salt (sodium chloride). Given the current health media messages, you might think that sodium was toxic.  Nothing could be further from the truth. The human body actually has to have sodium to survive!

Sodium is a crucial electrolyte stored primarily in extracellular fluids (that is, our blood and the fluid that surrounds all our cells). Our kidneys use electrolytes to regulate the amount of water in the body, an important job as our bodies are about 60% water. When we have high levels of sodium, the kidneys release less water. When we have too little sodium, the kidneys release more water. You’ve probably experienced this dynamic if you’ve eaten too many snack chips or popcorn or fast food and found your hands or ankles swollen the next day. Too high blood sodium levels can promote arterial constriction or narrowing leading to elevated blood pressure.

This is the overly-simplified explanation that leads many people to eliminate salt from their diet to avoid hypertension. But what we find in medical studies looking at the actual impact of reduced sodium consumption might surprise you!  In reality, there is very little evidence to show that reducing salt intake makes significant change in blood pressure for the vast majority of people.  In fact, most studies have shown little to no reduction in blood pressure when salt was eliminated and/or reduced and in fact reducing sodium may lead to an increase risk of insulin resistance!

This is another example of large-scale, we’re-all-the-same, national medical guidance that upon closer inspection doesn’t hold up to scrutiny.  There are, in fact, some individuals who are particularly “salt sensitive”, that is having a blood pressure increase in response to moderate sodium intake.  But there are many factors that play into this sensitivity, especially insufficient potassium.  Other key factors include lack of exercise, low melatonin and poor sleep, magnesium deficiency, and poor blood sugar control, especially a diet high in refined carbohydrates such as pasta, bread, chips.  One notable exception is those with kidney disease or other renal filtration impairment which usually benefits from reduced sodium intake.

The more important factor at play here for most Americans is low potassium.  A critical electrolyte which the body stores primarily inside our cells (intracellular fluid), potassium is just as important as sodium in the body’s effort to regulate fluid levels and movement. If our body can pump sufficient potassium into our cells, then it can keep most sodium safely out of our cells. The result?  Healthy, non-acidic cell environments and easy excretion of excess sodium. Stable blood pressure is, in large part, about a careful balance across all our electrolytes.  Some studies show that increasing potassium can decrease one’s sensitivity to sodium.

The problem is that the average American diet is very high in sodium while being simultaneously low in potassium (and also magnesium). In fact, no food in nature is higher in sodium than potassium. Our current situation is a man-made phenomenon courtesy of fast foods and convenience foods, overloaded with salt and lacking terribly in potassium-rich vegetables and fruits.  If you eat whole, natural foods with an emphasis on vegetables and fruits and use high quality sea salt that has not been stripped of all minerals such as Redmond’s Real Salt, you likely won’t have any problems with this balance.  With this type of diet, I believe we can rely on our taste buds and preferences and cravings to guide us in how much salt we uniquely need each day.

Do most of my Keeping it Real faithful followers eat too much salt due to a highly processed diet?  Probably not.   But does the typical American eat too much sodium? Absolutely.

Consider the Outback Steakhouse Bloomin’ Onion ® with over 4000mg sodium, more than a day’s worth in ONE appetizer.  Or Quizno’s Classic Sub with over 2500mg sodium in one sandwich. But the solution is in moving away from all of these processed, chemically laden foods and adding potassium-rich foods to our diet. To this end, most people think of bananas. But many foods are even higher in potassium (per serving e.g. avocado, cantaloupe, sweet potato, sundried tomatoes, Brussels sprouts, spinach, and even vegetable juices like Very Veggie (an organic “V-8” choice)).    Think about the wide-array of whole, nutrient rich foods God created versus the man-made junk that is on our supermarket shelves today!

My challenge to you is to not accept the fate of “blood pressure medication for life”. Remember that some drugs are truly critical, but they are all synthetic toxins. Blood pressure medications have real side effects such as low energy and potassium loss, for diuretics. If you are reducing salt in hopes of lowering your blood pressure, find out if it’s really working. For many people, it just doesn’t make a difference.  Many of my clients have been able to reduce or stop their BP meds completely with simple but determined lifestyle changes and a few supportive supplements.  The opportunity is to get to the true root causes of each person’s hypertension is empowering and life changing.  Suboptimal minerals are usually involved, but toxicity, methylation impairment, insulin resistance, and other dynamics may be at play too.

When you use salt, I recommend unrefined, natural sea-salt.   This option will give you a mix of trace minerals, but more importantly, it helps you to avoid the chemicals added to typical table salt which don’t have to be listed on the label (e.g. anti-caking agents such as sodium silicoaluminate or ferrocyanide).

Make a commitment to yourself to eat and live on purpose and see how wonderfully your body flourishes! 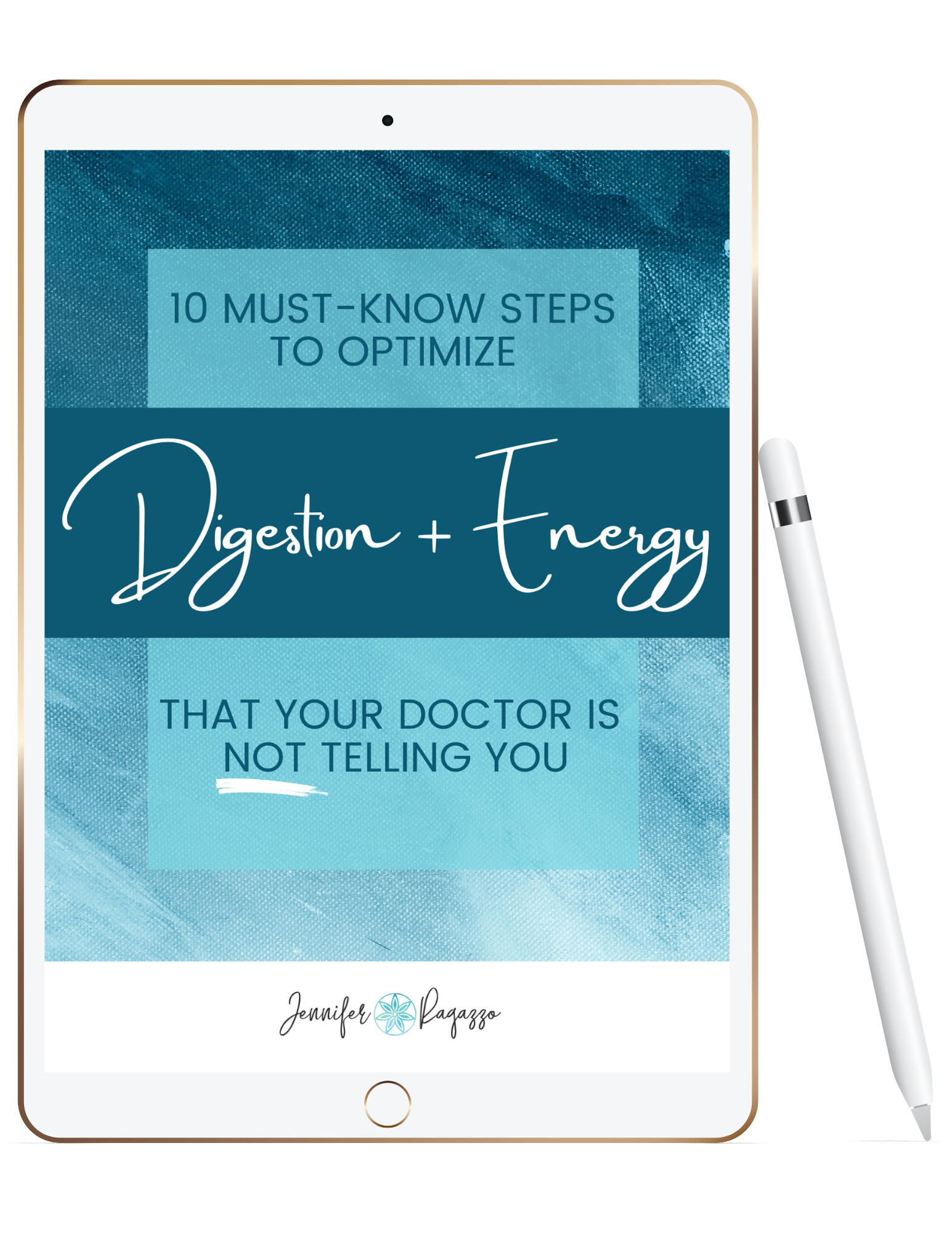 Ensure that your body is properly breaking down the foods you are eating, digesting them smoothly, and keeping your energy up with my 10 MUST-KNOW STEPS

BE IN THE KNOW!